NRC: The Good, The Bad and the Ugly

… and why it is unsafe To restart San Onofre

Davis-Besse Nuclear Power Station is a nuclear power plant in Oak Harbor, Ohio. On March 5, 2002, maintenance workers discovered that corrosion had eaten a football-sized hole into the reactor vessel head of the Davis-Besse plant. Corrosion had been clogging the plant’s filters for months, requiring repeated filter replacement, but the cause was not investigated until after a worker leaned against a control rod drive mechanism, and it toppled over. Although the corrosion did not lead to an accident, this was considered to be a serious nuclear safety incident. Some observers have criticized the NRC’s Commission work as an example of regulatory capture [See Note 1] and the NRC has been accused of doing an inadequate job by the Union of Concerned Scientists.  The Nuclear Regulatory Commission kept Davis-Besse shut down until March 2004, so that FirstEnergy was able to perform all the necessary maintenance for safe operations. The NRC imposed its largest fine ever—more than $5 million—against FirstEnergy for the actions that led to the corrosion. The company paid an additional $28 million in fines under a settlement with the U.S. Department of Justice. The NRC closely monitored FENOC’s response and concluded in September 2009 that FENOC met the conditions of the 2004 order. From 2004 through 2009 the NRC reviewed 20 independent assessments conducted at the plant and verified the independent assessors’ credentials. The agency also conducted its own inspections and reviewed FENOC’s reactor vessel inspections conducted in early 2005. NRC inspectors paid particular attention to the order’s focus on safety culture and safety conscious work environment to ensure there were no new signs of weakness. The NRC task force concluded that the corrosion, occurred for several reasons:

At San Onofre by Region IV and the NRC: The papers shown below have been obtained from Public Domain written by Dr. Joram Hopenfeld and a former SONGS Employee based on his investigation of the steam generator issues, review of the plant data and discussions with several Key SONGS Insiders. These papers confirm that Southern California Edison wants to restart unsafe Unit 2 nuclear reactor at 70% power under false pretenses, just for profits, and as an unapproved risky experiment by subverting the NRC and Federal regulatory process.  The true Root Cause (See Note 2) of the unprecedented tube-to-tube wear in Unit 3 has NOT been officially established, as required by NRC Confirmatory Letter Action 1 for restarting the defectively designed and degraded Unit 2.  NRC has not even completed their review of Unit 2 Return to Service Reports, nor have they finished Special Unit 2 Tube Inspections, nor have they (publicly?) reviewed SCE’s Response to NRC’s Requests for Additional Information (RAIs).
NOTE: NO FINES ARE MENTIONED – WHY?

Now, SCE wants the NRC to approve a new shady License Amendment, undermining public safety and they want it done without the involvement of Public Safety Experts, Attorneys and/or Citizens/Ratepayers.  After the review of the Mitsubishi Root Cause Evaluation and the Draft SCE License Amendment, it is crystal clear that the NRC needs to follow the example of their own enforcement at David Besse together with the lessons learned from Fukushima, when it comes to NOT approving this new Shady License Amendment for restarting San Onofre Unit 2’s defectively designed and degraded replacement steam generators.  In light of the unanticipated/unprecedented tube leakage at San Onofre Unit 3, the health and safety, along with the economic concerns/objections of 8.4 million Southern Californians’ MUST OVERRIDE and PREVENT the restarting of Unit 2 at ANY power level.  In a Democratic Society, truth must prevail over profit motivations, misleading propaganda of electricity service disruption and/or projected probabilistic temporary inconveniences to the public based on phony data, because America cannot afford a trillion dollar nuclear eco-disaster!

Our Safety must override SCE’s profits and prevent them from restarting Unit 2.
Notes:

1: Regulatory capture occurs when a regulatory agency, created to act in the public interest, instead advances the commercial or special concerns of interest groups that dominate the industry or sector it is charged with regulating.  Regulatory capture is a form of government failure, as it can act as an encouragement for firms to produce negative externalities. The agencies are called “captured agencies”.

END_OF_DOCUMENT_TOKEN_TO_BE_REPLACED


In an accident like a main steam line break at San Onofre, the badly designed retainers bars in Unit 2 could actually make things much worse by causing more damage to any of the 9,727 already fatigued tubes in each of its steam generators which could lead to additional leakage of highly radioactive reactor core coolant and/or cause a nuclear incident or worse a nuclear accident like Fukushima!

Radioactive Leaks and ruptures can happen without notice: 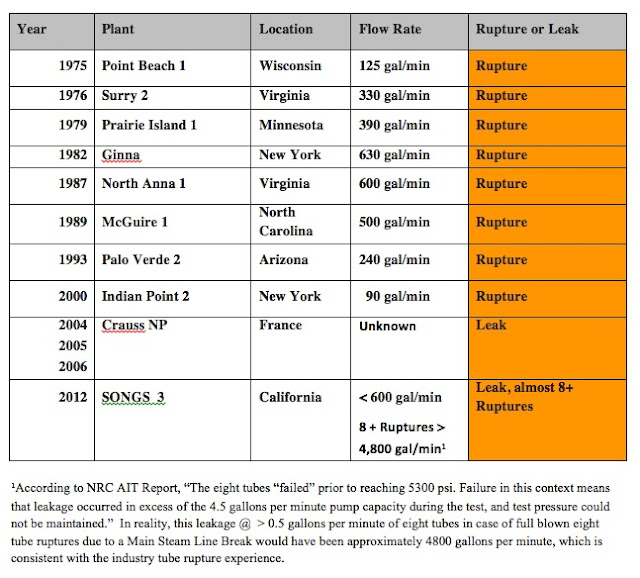 The NRC has decided in AIT follow-up report dated 11/09/2012, “Item 3. “(Closed) Unresolved Item 05000362/2012007-03, ‘Evaluation of Retainer Bars Vibration during the Original Design of the Replacement Steam Generators” as a non-cited violation in accordance with Section 2.3.2 of the NRC’s Enforcement Policy.”  However, as shown below, SCE/MHI’s failure to verify the adequacy of the retainer bar design as required by SCE/MHI’s procedures have resulted in plugging of several hundred tubes in the brand new replacement generators. This has resulted in these violations:

1. Failure to meet NRC Chairman Standards on Nuclear Safety by SCE,
2. Failure to meet Senator Boxer’s Committee on Environment and Public Works
(EPW) Standards on Nuclear Safety by SCE,
3. Failure to enforce SCE Edison Contract Document instructions to MHI by SCE,
4. Failure to meet SONGS Technical Specifications by SCE,
5. Failure to meet general design criteria (GDC) in Appendix A, “General Design
Criteria for Nuclear Power Plants,” to 10 CFR Part 50, “Domestic
Licensing of Production and Utilization Facilities GDC 14, “Reactor
Coolant Pressure Boundary” by SCE/MHI,
6. Failure to demonstrate that Unit 2 retainer bars will maintain tube bundle
geometry at 70% power due to fluid elastic instability during a main line
steam break (MSLB) design basis event, and
7. SCE/MHI took shortcuts by avoiding the 10 CFR 50.90 License Amendment
Process under the false pretense of “like for a like” replacement steam
generator.  SCE added 377 more tubes, increased the average length of the
heated tubes and changed the thermal-hydraulic operation of the RSGs without

proper safety analysis and inadequate 10CFR 50.59 Evaluation.
This intentional action to produce more thermal megawatts out of the
RSGs compromised safety at SONGS Unit 2 due to the failure of 90
percent through wall thickness of a tube by the inadequate design of the

NRC San Onofre Special Panel is requested to resolve the above listed Allegations and/or Violations within 30 days of receipt of this email and prior to granting SCE’s permission to do any restart “testing” of Unit 2. Answer all allegations factually, don’t just void them.

END_OF_DOCUMENT_TOKEN_TO_BE_REPLACED

WE HAVE THIS weekend to pre-sell just 6 seats to make this screening happen in San Diego! No excuses on the weekend, just DO it: You will NOT be charged until the event is confirmed. ($12 per ticket)http://www.tugg.com/titles/311-surviving-japan?lo…

END_OF_DOCUMENT_TOKEN_TO_BE_REPLACED

SCE’s PR Machine Is Capable Of Overcoming ALL Hurdles,

Except Good Science And Safety

Doing the same thing over and over again and expecting different results.

END_OF_DOCUMENT_TOKEN_TO_BE_REPLACED

SCE’s PR Machine Is Capable Of Overcoming ALL Hurdles,

Except Good Science And Safety

Doing the same thing over and over again and expecting different results.

END_OF_DOCUMENT_TOKEN_TO_BE_REPLACED

NRC AIT review of SCE 10CFR 50.59: The NRC AIT stated in its report, “Based on the updated final safety analysis report description of the original steam generators, the team determined that the steam generators major design changes were r…

END_OF_DOCUMENT_TOKEN_TO_BE_REPLACED

NRC AIT review of SCE 10CFR 50.59: The NRC AIT stated in its report, “Based on the updated final safety analysis report description of the original steam generators, the team determined that the steam generators major design changes were r…

END_OF_DOCUMENT_TOKEN_TO_BE_REPLACED

Three Questions affecting US reactor safety need to be answered ASAP, by the NRR:…

END_OF_DOCUMENT_TOKEN_TO_BE_REPLACED

Three Questions affecting US reactor safety need to be answered ASAP, by the NRR:…

END_OF_DOCUMENT_TOKEN_TO_BE_REPLACED

Plug All Of SONGS Unsafe Tubes, Not Just Some

The DAB
Safety Team along with the support of an ever-growing number of SONGS
Concerned Insiders and Whistleblowers, prepared t…

END_OF_DOCUMENT_TOKEN_TO_BE_REPLACED

San Diego, CA (November 9, 2012) – The failure of eight Replacement Steam Generator (RSG) tubes (something which has never
happened before…

END_OF_DOCUMENT_TOKEN_TO_BE_REPLACED

Fluid Elastic Instability
(FEI) is a phenomenon that can…

END_OF_DOCUMENT_TOKEN_TO_BE_REPLACED

Fluid Elastic Instability
(FEI) is a phenomenon that can…

END_OF_DOCUMENT_TOKEN_TO_BE_REPLACED

Let’s put the NRC on NOTICE and get others to do the same.

You can see how far they are willing to let things go by looking at the old generator they replaced.

END_OF_DOCUMENT_TOKEN_TO_BE_REPLACED

We were giving an interview down in front of the nuclear power plant. The reporter was surprised that we could get so close to the plant and at how low the Tsunami Wall actually was. I told him we could take a walk for a closer look.  After…