Radiation warning sign at Chernobyl (Image: AFP)
Scientific opinion is divided on the impact of Chernobyl on wildlife
The idea that the exclusion zone around the Chernobyl nuclear power plant has created a wildlife haven is not scientifically justified, a study says.

Recent studies said rare species had thrived despite raised radiation levels as a result of no human activity.

But scientists who assessed the 1986 disaster’s impact on birds said the ecological effects were “considerably greater than previously assumed”.

The findings appear in the Royal Society’s journal, Biology Letters.

After the accident, traces of radioactive deposits were found in nearly every country in the northern hemisphere.

The paper’s authors, Anders Moller of University Pierre and Marie Curie, France, and Tim Mousseau from the University of South Carolina, US, said their research did not support the idea that low-level radiation was not affecting animals.

“Recent conclusions from the UN Chernobyl Forum and reports in the popular media concerning the effects of radiation from Chernobyl has left the impression that the exclusion zone is a thriving ecosystem, filled with an increasing number of rare species,” they wrote.

Instead, they added: “Species richness, abundance and population density of breeding birds decreased with increasing levels of radiation.”

The study, which recorded 1,570 birds from 57 species, found that the number of birds in the most contaminated areas declined by 66% compared with sites that had normal background radiation levels.

It also reported a decline of more than 50% in the range of species as radiation levels increase. 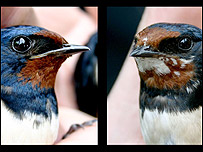 The findings build on a previous study of barn swallows in the affected area, which showed that the number of the birds declined sharply in contaminated areas.

The birds’ decline was probably the result of depressed levels of antioxidants after its long migration back to the area, making it more vulnerable to the low-level radiation, the researchers concluded.

“It suggests to us that barn swallows are not alone; there are many other species that appear to be affected in a similar way,” Professor Mousseau told BBC News.

“This paper also suggests that birds feeding on insects that are living in the upper surface of the soil, where contaminates are highest, seem to be most likely to be missing or depressed.”

He added that they were currently carrying out research to find out whether the decline was a result of the birds eating contaminated insects, or whether it was a result of fewer insects living in affected areas.

“We are also looking for funding to expand the range of ecological studies to include invertebrates, as well as plants and animals.”

A recent paper published in the American Scientist magazine suggested that plants and animals were better off in the exclusion zone than specimens outside the 30km radius surrounding the site of the destroyed nuclear reactor.

How wildlife is coping inside the exclusion zone

One of the paper’s co-authors, Robert Baker from the Texas Tech University, said that the benefits for wildlife from the lack of human activity outweighed the risks of low-level radiation.

Writing on his university web page, Professor Baker said: “The elimination of human activities such as farming, ranching, hunting and logging are the greatest benefits.

“It can be said that the world’s worst nuclear power plant disaster is not as destructive to wildlife populations as are normal human activities.”

Professor Mousseau acknowledged Professor Baker’s description: “It is true that the Chernobyl region gives the appearance of a thriving ecosystem because of its protection from other human activities.

“However, when you do controlled ecological studies, what we see is a very clear signature of negative effects of contamination on diversity and abundance of organisms.

“We clearly need to be applying scientific method to ecological studies before we can conclude, based on anecdotal observations, that there are no consequences.”