Soaring prices for materials like this nickel mined in Norilsk, Russia, have helped drive up construction costs for energy plants. 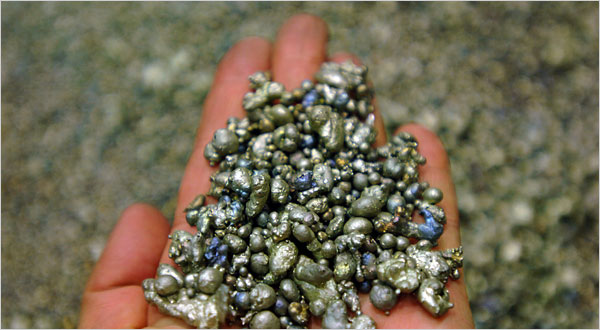 General Electric called in reporters yesterday for a briefing on a nuclear plant it is trying to sell in partnership with Hitachi, a plant it said can be built faster than before, operated reliably and have a vanishingly small chance of an accident.
Skip to next paragraph

But what will it cost? After some hemming and hawing, company executives gave figures by the standard industry metric, dollars per kilowatt of capacity, but in a huge range: $2,000 to $3,000.

â€œThereâ€™s massive inflation in copper and nickel and stainless steel and concrete,â€ said John Krenecki, president and chief executive of GE Energy. The uncertainty is not just in nuclear plants, he said; coal plant prices are now similarly unstable.

As talk of building new power plants rises sharply, so does the cost. A new fleet of coal-fired power plants and a revival of nuclear construction after three decades are both looking tougher lately.

For example, in late 2004, Duke Energy, one of the countryâ€™s largest utilities and most experienced builders, started planning a pair of coal-fired power plants to replace several built around the middle of the last century, at Cliffside, in western North Carolina. In May 2005, the company told regulators it wanted to spend $2 billion to build twin 800-megawatt units. But 18 months later, in November 2006, Duke said it would cost $3 billion. Then the state utility commission said to build only one of the plants, and in May of this year Duke said that would cost $1.83 billion, an increase of more than 80 percent from the original estimate.

Dukeâ€™s experience may be extreme but it is hardly isolated.

â€œThereâ€™s real sticker shock out there,â€ Randy H. Zwirn, president of the Siemens Power Generation Group, said in an interview. He estimated that in the last 18 months, the price of a coal-fired power plant has risen 25 percent to 30 percent.

Part of the problem is huge price increases for the raw materials that plants are made from, including copper and nickel, which is what makes steel stainless. But the cost of finishing those commodities into components is also rising.

â€œThereâ€™s a lack of production and manufacturing facilities in this country, and that may be partly to blame,â€ said Jason Makansi, a consultant with Pearl Street, a consulting firm in St. Louis that specializes in electric utilities. But, he said, â€œthe bigger culprit is the incredible demand in China and the rest of Asia.â€

â€œBasically everything is being sent over that way.â€

A result of demand in China and India, he said, is that â€œDuke and others want to build a new power plant based on inexpensive coal, but the capital cost to build that plant is doubling before they even put a shovel in the ground.â€

And other kinds of projects that use similar materials, everything from oil refineries to natural gas terminals, are competing for the same materials and labor, experts said. â€œSo many industries are at cyclical peaks at the same time,â€ Mr. Krenecki of G.E. said. â€œWe canâ€™t forecast how long that will continue.â€

Mr. Makansi and others say a result is that consumers, already paying more for electricity because the price of coal and especially natural gas is up, will pay even more for new generating stations.

Duke was not surprised that prices were up, but realized when it actually took in bids from suppliers that the situation was worse than expected. Analysts say that the companies that make major plant components will gear up to meet new demand and eventually price increases will moderate. But James L. Turner, president and chief operating officer of Dukeâ€™s United States electric and gas system, said the company could not wait for prices to reverse.

â€œGiven customer needs and demand growth on our system, we donâ€™t have the luxury of waiting to see if it all settles down in a decade,â€ he said, although the company says it would like to undertake more vigorous steps to cut demand through higher energy efficiency.

Nuclear plants still on the drawing board are also affected.

â€œFor nuclear and for coal, we pretty much figure itâ€™s going to be about the same effect,â€ said Revis James, an economist at the Electric Power Research Institute, a nonprofit consortium in Palo Alto, Calif. No matter what the technology, he said, â€œthereâ€™s been a huge amount of change in the baseline estimates people are using.â€

Renewable energy is not immune. â€œCosts have increased for wind as they have for other technologies,â€ said Christine Real de Azua, a spokeswoman for the American Wind Energy Association. â€œWhile wind farm operations are not hit by fuel price volatility, steep increases in the cost of raw materials like copper and steel and other factors have driven up the price of wind turbines,â€ she said in an e-mail statement.

Her association recently republished data from a utility that buys large amounts of wind power, Puget Sound Energy, showing that prices in 2006 ranged from about 8 cents to 10.5 cents a kilowatt-hour, up from 2004, when it was 4.5 to 6 cents. A recent study by the National Renewable Energy Laboratory, part of the Department of Energy, showed a steadily declining price from 1999 to 2005, but an increase in 2006. The study said that wind power was generally competitive with other sources of energy but that rising costs were â€œstarting to erode that value.â€

But the wind energy association said that competing technologies show even steeper increases.

All of this is bad news for efforts to slow climate change, experts say. Equipment to capture carbon dioxide from the smokestacks of power plants would be made of all the things that are rising in price: concrete, structural steel, steel vessels, valves and pipes. That equipment would require somewhat less of the most expensive components, the ones on the generation side that are meant to resist the highest temperatures, pressures and corrosive materials. But it would all be assembled by the same types of workers who are in short supply for building conventional power plants.