This is currently under work. Please go here for a more complete version of this project. This is a draft in work laying out resources and ongoing coverage of what is being considered the greatest industrial disaster in history.

As of June 20th, economic estimates for the triple wammy disaster have gone beyond $200 Billion with at least 15,000 dead. As stated above, this presentation will be changing as resources are developed and the story clarifies. 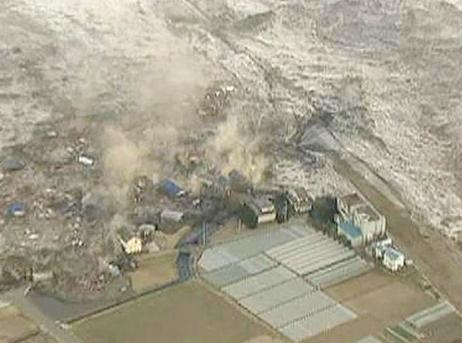 Sadly, the US and much of the global media has stopped covering the disaster simply to protect what’s left of the socalled “Nuclear Power Renaissance”.  The nuclear industry and its massive public relations arm knows all too well that public support for nuclear power is soft.   As can be seen in Japan, with 35 of Japan’s 54 nuclear power stations shutdown and 80% of the country wanting them all closed, there has been a sea change in Japan and many other parts of the world over the nuclear option. At least two surveys have shown that there has been up to a 25% drop in support for nuclear power around the world.  The impacts to Japan and its culture from the nuclear disaster should become the most important documentary process for activists around the world. Initially the world was told after the explosions hit Fukushima that the damages were caused by the Tsunami.  Only later after the world wasn’t listening did the facts come out that the earthquake, with an epicenter of 109 miles from nuclear facility did the much of the worst damage.  There’s a critical reason for this claim in that nearly 10% of nuclear power stations around the world are located near faults.  For example in California, nuclear experts lined up to tell state legislative investigators that such an event couldn’t happen here.  Not for over a month did the facts start to change.

With the recent claim by the International Atomic Energy Agency (IAEA) that nobody will die in Japan from the radioactive fallout from the accident, there needs to be a global call to document the lies and how they are being used to shut down public concern over the disaster.  There should be no doubt that few Japanese people trust the government or TEPCo simply because they were told for decades that a nuclear disaster like this was impossible.  The radiation stories are starting to leak out as damage control takes on a smiling face. On the day before the 90th day after 3-11, NHK did a program showing how industry people from the USA were in Japan telling frightened women that there was nothing to be afraid about. TEPCo and the government announced that those in the evacuation zone, some 125,000 people would all be given $100 a month per person for mental distress for the next six months. Japan like the USA has a ceiling on the amount of damages claims that can be demanded after a nuclear accident. Early estimates range from $24 to nearly $60 billion.  This, of course doesn’t include the cost of cleaning up and replacement of nuclear power.

TEPCo, one the five largest private electric companies in the world has lost over 3/4 of its value since the disaster and is being propped up financially by the government.  The national media in Japan is forced to cover the story, but in general is only releasing what it must.  Even coverage of the national protest on June 6th was almost non-existent in Japan. Government agencies are telling the public that there is no danger due to food, including from offshore fishing from the radiation from Fukushima that is still being released into the environment.